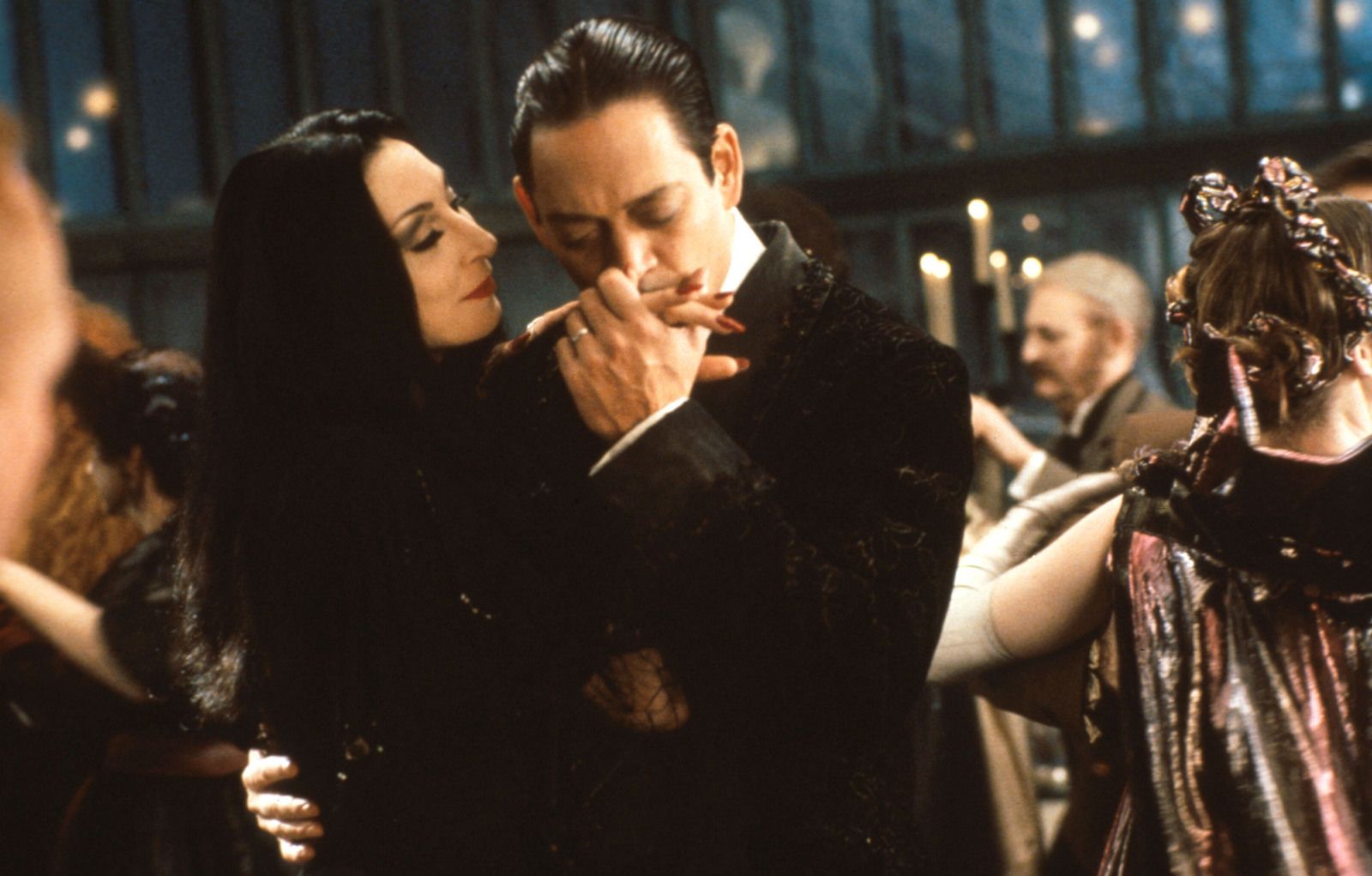 With the example derivatives, Morticia and Gomez’s expressions provide limited interpretive variations. But that’s okay because inference is not solely drawn from their expressions, nor the added text. For this collection of artifacts, inference can also be drawn from the audiences knowledge of Morticia and Gomez’s status as a perfect couple–an epic love story. In the original macro image, their expressions can be interpreted as adoring and ardent. Inference is drawn from the intended audience: those not only familiar with who Morticia and Gomez are but who most likely see their relationship goals as their own, as well. By adding text to the macro image of Morticia and Gomez, the creator communicates their own relationship goals and/or qualities they’re looking for in a mate, thus resulting in the desired persuasion. An example of effective persuasion is the “Morticia seeking Gomez” derivative. By altering the original image so that Morticia and Gomez are now in black and white, and doing a “fade to black” with the background,  the rhetor puts a “spotlight” on Morticia and Gomez in a loving embrace. The added text in a standard, white font initiates the conversation, “I’m just a Morticia, looking for my Gomez.” Neither Morticia nor Gomez are the implied rhetors, but rather someone describing themself as being like Morticia (a Morticia). This derivative is effective because their love for one another is undeniable. Not only for people who identify with Morticia maybe not so much in the fact of who she is as an individual but more so because they appreciate the way Gomez treats his lady, identifying this as an important element to the success of their relationship.

From the example derivatives, we can see that the original macro image has been re-created numerous times, in various ways, thus proving that ease of re-creation is available in various forms. Ease of creation, inspiration, and with minimal interpretation, are all the elements of persuasion needed to continue to successfully use this macro image for a multitude of variations. So, even though the example derivatives deviate from the original meme, it is important in the support of my claim that the original macro image meets the criteria to spur memetic development and continued circulation. With the “Morticia and Gomez are Halloween” derivative, we can reason that passion is the inspiration and motivation, for only fans who have a deep love for both Halloween and their mate would be persuaded by such a variation. The creators and participants of this meme are presumably not only fans who appreciate Morticia and Gomez’s passionate relationship but also feeling passionate about Halloween. For them, Halloween is much more than a holiday–it’s a way of life. Halloween is life, therefore, Morticia and Gomez are Halloween.

The implied rhetor/s of these example derivatives are not always Morticia and Gomez. Sometimes the implied rhetors are also the actual rhetors (those who create, recreate, and share the various meme derivatives), as well. The reason being that the implied/actual rhetor(s) are making an observation and/or comparison to the epicness of Morticia and Gomez’s love story. A perfect example of this would be the “Morticia and Gomez meet the Downeys” artifact. The original macro image and the merged image are virtually identical in points of embrace and expressions. But this is not where the similarities end. If that were the case, this derivative would not achieve memetic success. No, what makes this one successful is that the very criteria that elevates Morticia and Gomez to epic love/perfect couple status are also what elevates Susan and Robert Downey Jr. to it, as well–they haven’t “settled”, they’ve made concerted efforts with each other, they’re passionate about each other, and, most importantly, they are invested in maintaining the success of their relationship. In this derivative, the creator is not drawing inference on expressions and added text alone but is also drawing on the well-known belief that Morticia and Gomez are, in many ways, the perfect couple/love story. Morticia and Gomez’s expressions of adoration and earnestness do, in fact, inspire this derivative. However, the creation of this artifact was not inspired solely by something Morticia and Gomez are experiencing (or Susan and Robert, for that matter) but rather what the creator and participants are experiencing–not one, but two epic love stories.

The creation/recreation of the various example memes still allows the actual rhetor to speak through the implied rhetor to the audience, even though Morticia and Gomez are not always the implied rhetor(s). The intended audience for the example derivatives are fans of Morticia and Gomez Addams, Halloween and horror, and admirers of their epic love story/perfect couple status. However, the actual audience is essentially anyone who has access to the internet via computer, smartphone, tablet, etc. The rhetor’s motivations are opportunities to make known their criteria for love/a successful relationship looks a lot like that of Morticia and Gomez. And when I say this, I’m not necessarily referring to the fact that their “creepy and spooky”, no, it’s more bare bones than that.  I’m talking about the fact that this is a couple who truly love each other and have for a long time. And what’s even cooler than that is the fact that they’re still into each other–excited–passionate–involved. These are the driving force behind the creation/recreation of these derivatives.

One of the best uses of humor in the example derivatives is found in the “Morticia + Gomez = love connection” meme and it’s definitely a key component to the derivative’s success. However, it’s also successful because of the rhetor’s use of pathos: “. . . the emotion of the audience. This mood or feeling motivates the audience to believe or do something” (Longaker & Walker, 2011, p. 46). The text with this derivative reads: “If she loves horror and Halloween, treat her like the ghoul she is.” Although Morticia and Gomez’s expressions still infer adoration and ardency, they are no longer the only emotions (nor expressions) that come into play. Now, we have a second macro image of the 1960’s Morticia and Gomez, and they’re expressions infer a different set of emotions–60’s Morticia’s expression is intense and direct, if not a wee bit “off” and 60’s Gomez’s expression is clearly pleased and excited, as if to say “hell yeah.” With this derivative, the rhetor’s message is that if she likes the cool things that [you] find important, treat her well/right, and don’t let her go. Halloween and horror are the perfect examples of what’s important in a relationship when Morticia and Gomez are the macro images. Replacing “girl” with “ghoul” is effective wordplay that’s funny. Logos is also apparent in the example derivatives. This is “the reasoning itself . . . it is the unspoken relationships between the speakers’ statements and the conclusions they encourage the audience to draw” (Longaker & Walker, 2011, p. 47). This is one example meme where the perfect couple status does rely on the audience’s knowledge that Morticia and Gomez are “creepy” and “spooky.”

These are the participants who are sharing these example derivatives because they are familiar with Morticia and Gomez Addam’s and understand/appreciate the dark, perfection of their relationship. They also understand the context of the derivatives such as two people don’t have to die tragically to achieve an epic love status, other living couples who have achieved epic love status, love Halloween and horror–she’s a keeper, and the ultimate comparison of feeling like every night is Halloween, thus sharing what they can relate to. In a world that’s so full of crappy relationships and early termination because there’s such an unwillingness to put in the effort–be devoted to someone, we savor those rare instances of great love stories/perfect couples. The commonality in the example derivatives’ arguments is defining desires through examples. Whether that which is defined is being observed or experienced, the message is clear. As previously mentioned, three things enable these memes to spread and vary: Creation and reception mainly revolve around an understanding of the characters of Morticia and Gomez Addams, an appreciation for their unflagging devotion to each other, and the original image is definable and interchangeable, thus relatable, shareable, thus the presentational form is successful.