It’s the first weekend in the 13 days. This means more time for movies, food, and fun. So, this year, I’ve decided to do something a little different by having double-feature days. For these double-feature days, I’ll do a mashup of 2 theme days and movies in one post. Now, if you’ve been following my blog, you’ll know that I’ve already done a Nightmare Before Christmas post but never one about Corpse Bride (which I love). I love how painfully awkward Victor is but gradually becomes more self-assured. I love how he and Victoria bond over the piano (much like he and Emily do). I love how beautiful Emily is and how even though her story is tragic (just wants to find love but finds a bastard instead), she succeeds in making sure Victoria doesn’t suffer the same fate at Barkis’s hand. Did you know that it only took Johnny Depp 15 minutes to develop Victor’s mannerisms and motivations? Of course, he’s brilliant so . . . not surprising. Anywho, NBC and Corpse Bride are not just seasonal favorites, in my house. They are timeless and watch all year round. In fact, as I’ve mentioned before, NBC is our traditional Christmas movie. Let’s get started.

I stumbled across this medley, while searching for something else, and let me just say, I absolutely love everything about this cover.

So, anyone who is a Tim Burton fan has more than likely heard the fan theories: All of Tim Burton’s original films (Frankenweenie, Vincent, Edward Scissorhands, Beetlejuice, Nightmare Before Christmas, and Corpse Bride) are connected. Whaaaaat?! I know–I know–I have a hard time believing that shizz too. The theory (in its most basic form) is that Victor (Frankeweenie), Victor (Corpse Bride), and Jack Skellington are all the same person. Then we’ve got the recurring dog: Abercrombie (Vincent), Sparky (Frankenweenie), and Zero (NBC) are all the same dog–also, Scraps (Corpse Bride) somehow fits into the reincarnating dog theory. Ugh!! I know right??!! I’m so confused. And! Annnnnd! The theory claims that Sally was Vincent’s (Vincent)”wife” that he claims he buried alive and then re-animated. Think I’m full of shit? Read for yourself:

So, what do you think? Theory good or theory b.s.? Let me know in the comments below.

I really like this scene because I feel like it was a turning point for Victor and Emily; they became friends. For me, it mirrors Victor and Victoria’s time at the piano and the moment they knew they’d be OK if they married each other–or some junk. Anywho, I feel like playing the piano is Victor’s way to wordlessly communicate. You know?

Simply timeless! Never gets old. Love. Love. Love!  I chose this scene to share because it ties in with what I chose to make for dinner (heh-heh).

These guys are fun! And the soup is delish.

If the egg white isn’t your thing, or you prefer non-alcoholic, try this . . .

So I found this on Pinterest, but the link was broken. It’s such a pretty little design, though, and would be simple to re-create: cupcake flavor of your choice, pale blue frosting, and use black fondant for the hearts. Ta-dah!! 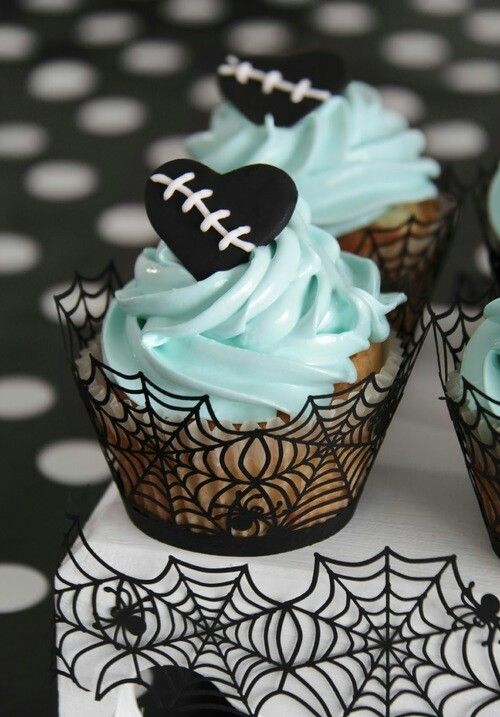 One thought on “Corpse Bride Nightmare: a 13 Days mashup”