So, how’s everyone’s Halloween season going so far? People often chuckle when I tell them that October is my busiest time of the year. The fact is, I’m not bull shitting them. When October rolls around I come alive. I love when Halloween items start showing up on store shelves. I feel a thrill when the air cools and the leaves start to change. It really is the most wonderful time of year. And here we are at the end of the third day in the 13. Today’s theme: vampires. Yes, it’s true that a few months ago I did a vampire themed day in the 13. The fact is, I have done many vampire themed days in the history of my Halloween tradition. I mean, really, the possibilities are endless. And although today’s main dish is the same as my previous vampire post, the rest of today is different. For example, today’s theme is dedicated to Anne Rice’s vampires. Love the books, love the movies. So, let’s get started.

So here’s some vampire fun that I stumbled upon on Pinterest.

This song is from the Queen of the Damn Soundtrack. Honestly, I dig just about every song on this soundtrack, but this one is definitely my favorite.

“There comes a time for every vampire when the idea of eternity becomes momentarily unbearable. Living in the shadows, feeding in the darkness with only your own company to keep, rots into a solitary, hollow existence. Immortality seems like a good idea, until you realize you’re going to spend it alone. So I went to sleep, hoping that the sounds of the passing eras would fade out, and a sort of death might happen. But as I lay there, the world didn’t sound like the place I had left, but something different.” –Lestat

Now, there are some who are not fans of this movie. Many avid fans of the books feel this movie does not do Anne Rice’s vampires justice. Even though I am a fan of this movie, I feel compelled to share one fan’s opinion that this movie sucked . . . because it amuses me. Here it is.

“Embrace its plot holes and stupid dialog (which lends itself to random quoting), sing along to the entertaining rock songs. Try and figure out what each of the ancients are named. Pride yourself if you can provide any explanation for what happens at the end of the movie, because ‘trimming to help the pace’ leaves the ending fairly incomprehensible, especially to those who have read the books.” Good times. What do you think: suckfest or a groovy little flick?

The night just wouldn’t be complete without watching this one:

Unlike Queen of the Damned, the movie Interview with a Vampire fared a little better with fans of the books. Here’s one such fan’s review: “I refused to see this film for 3 years because I believed it would be what I perceived it to be: glitzy Hollywood garbage geared toward adolescent girls with posters of the 3 main actors all over their walls. I finally broke down and rented it, and I was astonished by the incredible performances delivered, the thrilling dialogue and the way it was delivered by the actors, the scenery, the plot, the score … everything.” 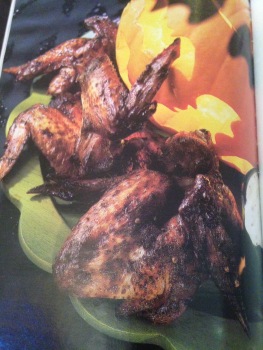 Basically, these are just good ole ramen noodles in whatev flavor that you like. In Vampire Venue I did a variation of this using cooked spaghetti that I tinted gray with a little black food paste. However, I’m not allowed to do this to the noodles anymore because my grown children refuse to eat gray noodles. Whatever, I hope the little shits realize that they’re stifling their mother’s creativity. I have wings–I need to fly!

8 thick slices cucumber (I don’t do this; I think it’s dumb)

8 tablespoons grenadine syrup (I don’t measure this out)

This is pretty delish. It’s even more tasty with a splash or three of vodka (wink, wink).

This recipe also comes with an Appledy-Goop (whatever the hell that means) dip but I’ve never made it. So I’m just doing the recipe for the bats.

For the bloody ice scream, I simply scooped up some vanilla ice cream and drizzle strawberry syrup over it. Serve with bats.

Tonight’s photo op turned out a lot better than last night’s which you can find here. Let’s just say I’ve learned my lesson and won’t being going off menu again.

As you can see, my bat wings aren’t as dark as the ones in the above picture. I’ve never been able to get them that dark. Well, that’s not entirely true. The closest I ever came to getting my wings that dark is when I forgot to set the kitchen timer and went off to do something else. C’est la vie! You might also notice the little treats with green olives. Those are called Eye of Newt and were not on tonight’s planned menu. They are, however, the most popular of my Halloween cuisine and are made frequently and spontaneously during the 13 days. My daughter decided they needed to be made tonight. You, on the other hand, will have to wait until Saturday’s post to find out how to make them.

The dessert was a big hit. Although, it was brought to my attention that the bats were “crunchier than expected”. Luckily, I don’t give a sheared sheep and am able to move on to tomorrow’s menu.