So, today’s theme is Nightmare Before Christmas. Shut up, I know! This movie is so many things to so many people and it is loved. I mean, who can forget the moment when Sally poisons Dr. Finkelstein for the 50th time and escapes by flinging herself from the tower. Good times. What’s your favorite scene? Everyone has at least one. In my house, we watch it every Halloween and Christmas Eve. Actually, we watch it whenever we feel like it, but whatevs. What I’m trying to get around to is that there’s an age-old debate about whether Nightmare Before Christmas (NBC) is a Halloween movie or a Christmas movie. I mean, the first half of the movie is dark and Gothic and very much Halloween. Yet, the second half of the movie definitely has a Christmas feel what with the sleigh and delivering presents, even the snow, but even with the Christmasy feel, Halloween is still prevalent. What do you think–Halloween or Christmas? I say it’s a Halloween movie all the way. Read here to find out Henry Selick’s answer. Whether you agree or not this day in the 13 is all about it, so let’s get to it.

Turn it up, peeps. This is the best of the best right here.

I have 3 kiddos, and yeah, I called them Lock, Shock, and Barrel for a time. Good times.

BAHAHAHAHA! Not what you were expecting? OK, I was just sharting you. Here’s what we really watched:

For this one, I basically took some Green Berry Rush Hawaiian Punch, threw some Sierra Mist in it and called it Frog’s Breath. It’s tasty and the kiddos enjoy saying that they’re drinking frog’s breath. The way I see it, you’ve gotta cut yourself some slack sometimes in the creativity department. Otherwise, you could become stressed trying to dazzle them with shizz or go broke buying a butt load of ingredients. They’re kids, chances are they’re already impressed that you’re even attempting something as cool as Halloween-themed dinners.

OK, so this dessert looks totally kick ass and sounds really yummy, however, it’s a real bitch to make. My daughter isn’t too keen on pumpkin flavored foods, so I actually bought the ready-made cheesecake filling by the Philadelphia cream cheese peeps and plopped that on top of the brownie crust (which is the only easy thing about this damn recipe). Then I did the melted chocolate chip pumpkin face (which was hard as feck to do, as you will see by my meal photos). Also, if you don’t have a springform pan–join the club–I used a regular pie plate/pan so don’t sweat it. 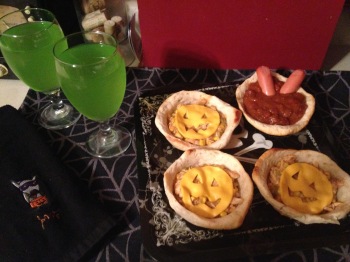 So, now that I’ve uploaded my photo, I realize that my dismembered fingers in the chili bowl look more like 2 dicks in a bowl. Wow. That is unfortunate. I guess you’ll just have to believe me when I say that arrangement looked much better live than photographed. Feck.

Here’s my pumpkin cheesecake. In my haste, I forgot to add the food coloring to make it orange, although looking at it now, I doubt it would have made it more impressive. Let me just say that the melted chocolate chip technique sucked. I think I might have cut the hole too big in the ziplock bag as well. The lines came out really thick and it was hard to work with because the chocolate started to cool. My daughter said it didn’t look that bad, but she’s cool like that. Think twice before making this one.

And now that I’m done with the whole food and bevy part of this, I’ve got a little bonus for you NBC diehards (you know who you are and I’m right there with ya).

All of Tim Burton’s Original Films (Frankenweenie, Vincent, Edward Scissorhands, Beetlejuice, Nightmare Before Christmas and, Corpse Bride) are connected. The hell. You say. Read here and then come back and let’s discuss it in the comments below. 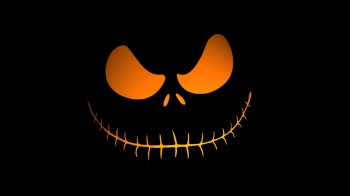